How to edit files within docker containers 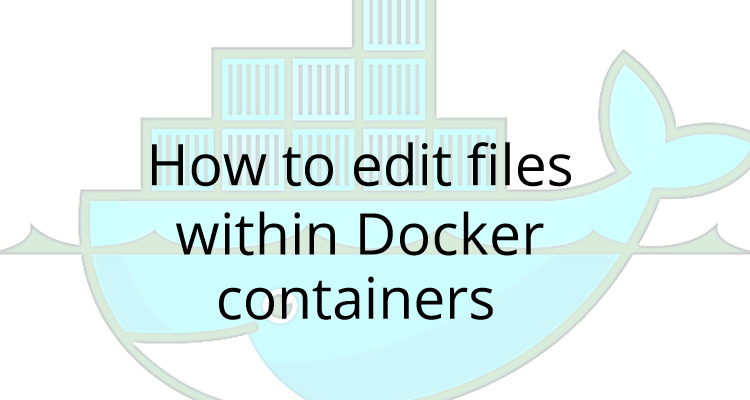 You have probably heard countless times that you should never edit a docker container’s state, or editing container state is an anti-pattern, or if you need to edit a container’s state you should use volumes. That advice is good advice and so this article starts with a disclaimer.

If you really need to edit file(s) within a docker container you most likely should do it in one of two ways:

I would recommend never editing a file in production unless the file is part of a mounted docker volume (and even then you should exercise caution not to inadvertently affect the production system). That being said, making minor, ephemeral edits to files within a development environment outside of production can be a quick and easy way to test a change and/or aid in debugging. If the edits you make are not minor consider using the one of the two methods listed above to make changes to your files.

With the disclaimer out-of-the way we can move on to our running example:

There are two ways in which we can get inside the running container to edit the configuration file:

This article covers the first method but in practice it is a lot easier and much more convenient to use the second method. This is because containers usually do not have text editors installed within them (even vi and nano  will usually not be present) and as a result we have to either install a text editor or use a tool such as sed.

Click here to read an article exploring how you can utilise the second method by remoting into you container using Emacs’ as your editor.

Opening a shell and editing the httpd.conf file from the command line

Remember our running example: we would like to edit the httpd.conf  file to increase the LogLevel of our Apache server (httpd) container. In order to make the change to the file within the container we take the following steps:

2. Get the id of the running container

3. Open a shell in the running container

4. Check the current value of the LogLevel directive within the configuration file

5. Use sed to search and replace the line with what we want

Make the edit to the file

6. Check that your file change has been made correctly

LogLevel has been changed

Exit the shell and container

8. Restart the container for the changes to take effect

That’s it – you’re done! This article walked you through how to edit a file within a docker container by opening a shell within the container and using sed to replace the line which we wanted to change. This is definitely not the most convenient way and so is probably only appropriate for quick, ephemeral changes that would be discarded later.

A more convenient method of making changes to files within a container is to remote into the container and make changes with your favourite editor. Click here to read an article which explains exactly how to do that using Emacs.

How to start a shell in a running Docker container

LigerLearn uses cookies to ensure you get the best experience on this site.OK