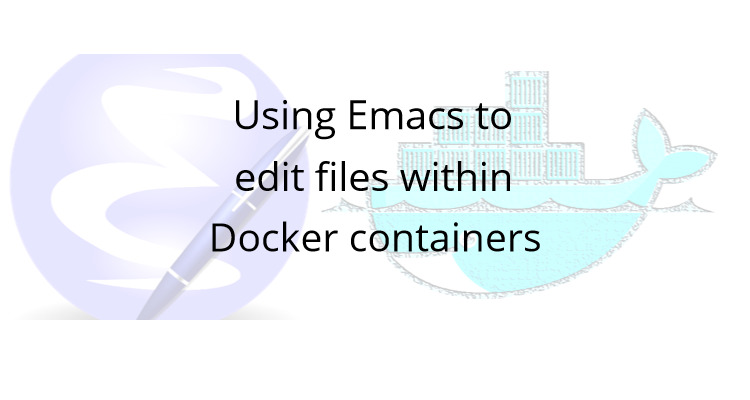 This article explores how you can use an Emacs package docker-tramp, which extends the built-in TRAMP mode, to remote into your Docker containers and make changes to files from within Emacs. In a previous article, how to edit files within docker containers, we discussed how you could make changes to files within a running container by opening a shell and using the command line program sed.

If you are an Emacs user you will find the method in this article much more convenient than opening a shell within a running container as you retain the full power of your Emacs configuration and are presented with familiar interfaces in the form of Dired  and TRAMP. But before we begin you should familiarise yourself with the disclaimer from the previous article so you know when it makes sense to actually edit files within containers and the alternative options available ( docker volumes  and DOCKERFILEs). Essentially you should use Emacs to make changes to files within containers only when those changes are ephemeral and outside of production environments.

The running example from the previous article is reused in this one and repeated below.

Our running example is as follows:

Using Emacs to change a file within a running docker container

We would like to edit the httpd.conf file to increase the LogLevel of our Apache server (httpd) container. In order to make the change to the file within the container we take the following steps:

Note:  you need to make sure the MELPA repository is part of your package-archives  variable in your emacs  configuration otherwise the package will not appear in the list. See the ELPA Emacs wiki page for further information on how to do this.

3. Get your container ID

4. Connect to your container through TRAMP in emacs

Entering the id of the docker container in Emacs

Entering a typical dired buffer within a docker container

5. Open the file you wish to edit, make your changes and save them

5. Restart the container for the changes to take effect

This method is much more convenient for Emacs users than the one discussed in the previous article (opening a shell inside the container and using sed). Of course, as mentioned before, if the file change you are making is not intended to be ephemeral then consider making it part of an image’s DOCKERFILE  or using docker volumes .

How to edit files within docker containers

How to start a shell in a running Docker container

LigerLearn uses cookies to ensure you get the best experience on this site.OK